I can’t believe the time has finally come that we know what our little babe IS! Yesterday after a long, tedious, and quite frankly a little nerve-racking ultrasound, John and I left with an envelope in hand that revealed the gender of our newest babe!

I immediately went to the store to pick up confetti poppers (which the cashier so kindly went and picked out after opening the envelope). From there I picked up A from my parents’ house and as soon as John was off work we headed to the park with the confetti poppers as a family.

Unfortunately the video didn’t work and so until now the secret’s been kept. So without making you wait any longer (like you didn’t already scroll! haha)….. 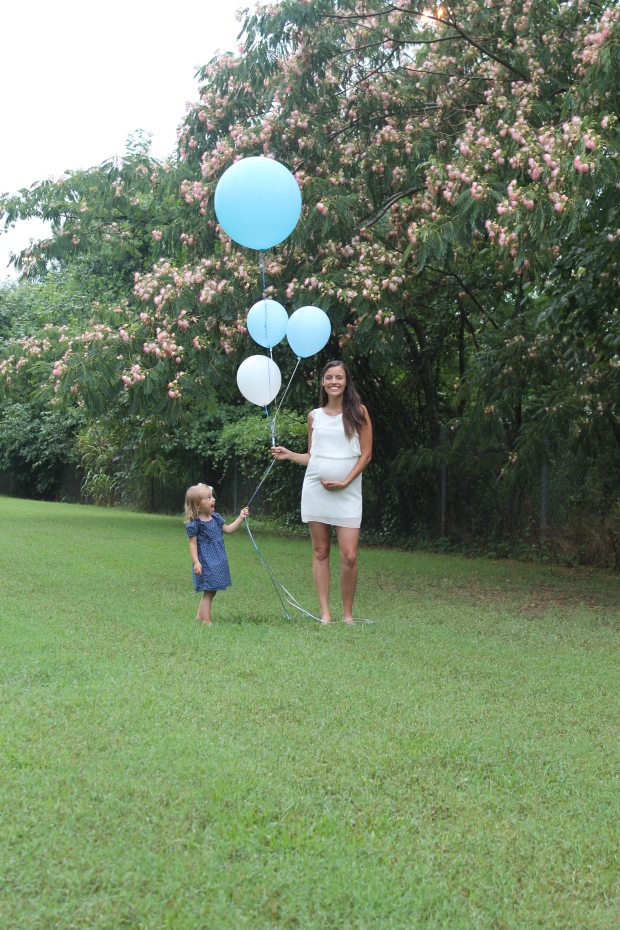 And now for the “bumpdate” :

Anatomy scan: We have been so anxiously awaiting the news of Baby’s gender, but more so than that waiting to hear that all was healthy overall on the anatomy scan. I think some people get so caught up in the gender that they forget what this ultrasound is actually all about. There were a few minutes where the tech just couldn’t get a good look at the heart and mentioned that the chambers didn’t look symmetrical, as they should. She immediately assured us that it had to do with the angle of the ultrasound probe, but for obvious reason we were a little on edge at this point. After a grueling 5ish minutes she finally got a good angle and saw that the two top chambers were actually less than 1/10 of a mm difference in size. Relief!

Our boy showed off his manhood just fine so the tech had no questions there and everything else looked perfect! Everything measured great and he’s right on track with where he should be!

Our reaction: We were SHOCKED! And I, honestly, still am! We both thought it was another girl (though we admitted that to no one, including each other). That’s not totally why we were shocked though! Before the ultrasound started we told the tech that we didn’t want to know during the appointment, but wanted to do a reveal later with our daughter. Throughout the ultrasound she’d turn off the screen and do what she needed to do and referred to the baby as Baby, but a few times throughout the ultrasound (after she said she’d confirmed the gender) she referred to the baby as a “she.” We were sure she’d slipped up and it was a girl! (We still don’t know if she was referring to the baby as a she because that’s what’s often done OR if she was just plain old trying to throw us off!)

I mean we literally thought the confetti was wrong when we did the reveal with A! We went and grabbed the envelope to check it’s contents and lo and behold, it was a boy!

How mama’s been feeling: This pregnancy continues to mirror my pregnancy with A and I’m feeling great! Actually I have had round ligament pain 2 times in the last week or so, but that’s been the only difference. (That’s no fun, by the way!)

Other odds & ends: I recently resigned to go back to staying home with A and then eventually Little Man, once he arrives. Life’s been busy, but good, and we actually have some more news coming soon! Life’s an adventure, that’s for sure! Our next appointment is in 4 weeks and is an overall mama wellness check, will measure uterine growth, and will check baby’s heartbeat.