The “I Have Something to Say” series continues today with a story that had me in tears. Sometimes we have to walk through grief to see the beauty on the other side!

I was always the type of person who had every little detail of my life planned. Meals were written down, I knew what I was going to do each weekend as predefined on my calendar, and I had the typical 5 year plan after my husband and I were married. We both wanted to start a family immediately after we got married and we were fortunate to have our first daughter 10 months after our wedding. Life was perfect, or so I thought. Fast forward a year after the birth of our first child, and we were once again attempting to conceive. After 5 months and 2 miscarriages, I found myself in a deep sea of depression. Anger, resentment, and a million other emotions flowed through my veins on a daily basis. I grew up with a very strong faith in God, but like many, I had developed other priorities in my early twenties. In the midst of my pain, I decided it was time to turn back to my faith and try to find healing. People say crisis can bring you to your knees, and that is exactly where I was. I learned again what it meant to have true faith in spite of my circumstances.

Within 3 months, I was pregnant again. I thanked God every day for giving me this gift, and I told God daily that this baby was His child. I knew in my heart that God met me where I was in my grief and had blessed me with this amazing little gift. The day Harper was born, there was immediate commotion in the delivery room. When the nurses handed me my daughter, they told me she had a positional issue with one of her feet. This statement meant nothing to me in that moment because I was in complete awe of my baby girl. A couple of hours later, I noticed her foot was completely turned inward and my heart sank. As a mother, your hope is for your child to be completely healthy and here I was in my hormonal mess of emotions with a baby that had a crooked foot. The doctors told us that it was positional and that it would straighten itself out, but something in my gut said this wasn’t going to fix itself. My mother-in-law told us in the hospital later that day that my husband had had the same issue when he was born, as did his father. What? Why would you not tell me about this before today? I was immediately concerned and requested a referral to see a specialist.

When Harper was a week old, we took her to the orthopedic doctor and she revealed to us that our daughter had Club Foot. This was not something that was going to fix itself as the previous doctors had told us. She then told us that we would need to cast her foot from the thigh down for 3 months, recasting each week, followed by the need to wear a Ponseti Brace 23 hours per day for a year. The total treatment would need to be 4 years and there was possibility of surgery. The emotions I experienced that day were overwhelming. We left the office and I cried the entire rest of the day. Our daughter was supposed to be perfect, why did I have to go through this after all that I went through to have a second child? I told myself that I was being stupid because my child only had a crooked foot, at least it wasn’t something worse, but I couldn’t contain my emotions. I was ashamed of the cast and people constantly stared at us when we were in public. I was even approached one day in Toys R Us by a woman who asked me what I did to my baby’s leg. I walked around all summer with a blanket covering my child’s legs to hide the cast. I was scared she would be delayed; that she would be unable to walk correctly. All of the worries that a mother experiences grew over those early months. Harper could not sleep at night due to the cast. We could not give her baths, or even put regular clothes on her. The financial strain kicked in as we took her to the orthopedic office once a week. I felt very alone during this time as I internally struggled with the entire situation. I did not want to complain to anyone because I had an overall healthy child, which resulted in my concerns going to God. My husband and I had just began going to a new church, and I had been praying for my daughter daily. One Sunday morning we picked Harper up from the nursery and they handed us a piece of paper. On this paper they had stamped my daughter’s feet and it said, “Our prayer is to help Harper take her first steps with God.” It was in this moment that I experienced ultimate peace. I knew that this simple art project that was done in the nursery was God’s way of telling me that Harper was HIS child and that he was going to take care of her better than I ever could. I knew we had found our church home. 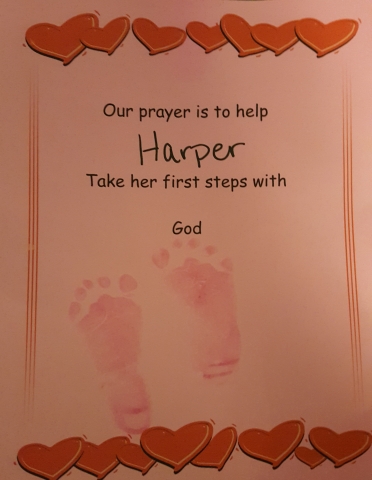 Today, Harper has reached every single milestone, even before her older sister did and runs everywhere she goes. Her foot is corrected. At just 14 months old, there is no need for the surgical intervention or brace. The initial prognosis of a 4 year treatment ended up only taking 7 months. I believe that this experience was another opportunity for God to remind me that I need to have faith in Him always. I look back and am actually grateful for the experience that brought with it growth and peace through faith.

Melissa is a mom of two sweet and feisty little girls. She is married to her high school sweetheart Jesse and is constantly trying to do it all. Melissa has a demanding career and strives to find the sweet spot and balance in life. Her faith in God is what keeps her going through the tough moments.