I’m sitting here at the computer and don’t even know what to type. I was planning on working on a personal blog post that has been sitting in my drafts folder, but I feel like when I look back over my blog in years to come this will be something I should have written… My grandmother died on Monday and it seems like I have to address that on my blog before I can move forward. I don’t know. Sounds silly now that I’ve typed it, but there it is.

I also am supposed to be working on the slideshow for her memorial service on Saturday, so maybe that’s what I’m really putting off.

I think I’m still in a bit of a fog from getting the call on Monday. You see, she wasn’t ill or anything. She is (was??! Ugh!) sharp as a tack. Her memory impeccable. Her body, doctors said recently, healthy enough to live another 20 years. I actually found myself so upset once I got to her house that day because there was a black and white picture sitting on her desk and I don’t know who is in the picture. Since I’ve been a little girl whenever I would come across a picture, Nanny could always tell me who it was. Always. Now what am I gonna do when no one knows who’s in the picture? Again, typing this out, that sounds so silly, but it’s just a normalcy you get used to, “Nanny, who is this?” and the answer and an explanation of the picture that immediately followed.

I’m going to miss that.

I guess I should also address that name – Nanny – since I don’t think I’ve ever heard anyone else call their grandmother that. Her husband, my grandfather, was always called Bunky. That name was made up by my oldest cousin and just stuck. I think I’ve asked over the years where “Nanny” came from and no one remembers.

Did I ever ask her directly? Does she know where the name came from?

There are so many things about Nanny that I love and appreciate. She would always like eclectic things that Adalynn or I would wear. A lot of times when I bought something I’d think, “Nanny will like this.” She always liked clothing or jewelry that was different. When I was a little girl she gave me a pair of earrings. They were made of wood and carved in the shape of a fish. And they were huge. But I wore them with pride because Nanny and I liked them and that’s all I cared about. Not that other fifth graders don’t typically wear giant tropical fish earrings made of wood.

Adalynn has on gold pants today and a gray shirt with ruffles and hearts all over it. It’s ridiculous and adorable and I just know Nanny would love it.

Her and I have a joy for pictures too. She was working on organizing bunches and bunches of pictures she had from over the years. She could always count on me to flip through albums with her. She was proud to show me how she’d organized them. And anyone that knows me now knows that I can’t help but love pictures, it’s genetic. I always showed her pictures too – family photos, vacations, whatever – and above anyone else I would get her undivided attention while she looked at them. For goodness sakes she sat there and watched the entire half marathon course tour video I showed her! (Even though I’m not sure she ever 100% believed I actually ran 13.1 miles Haha)

I’m going to miss her so much. Adalynn and I would go see her every other week or so, but of course, I wish it was more. Especially now so! It’s not something I am going to beat myself up about because whatever the situation I could find something I could have done more. I may have visited her everyday and said, I should’ve stayed for more time. You know what I mean? I passed by her house on my way back from New Jersey the week before last so Adalynn and I stopped for a visit. Sometimes she wasn’t in the best mood or Adalynn was kind of shy with her, but this particular visit she was in great spirits and Adalynn had the outgoing, silly, fun side turned all the way up. She was teasing Nanny with toys, dancing around the living room, and climbing up into her lap. They were both so smiley, I jumped in with them and snapped a couple selfies. A little bit later, we left, but not before Adalynn ran back up to the door. I stuck my head in again and told her again that I loved her. As wonderful as a memory that day was I sit here and still can NOT believe that was the last time I saw her. 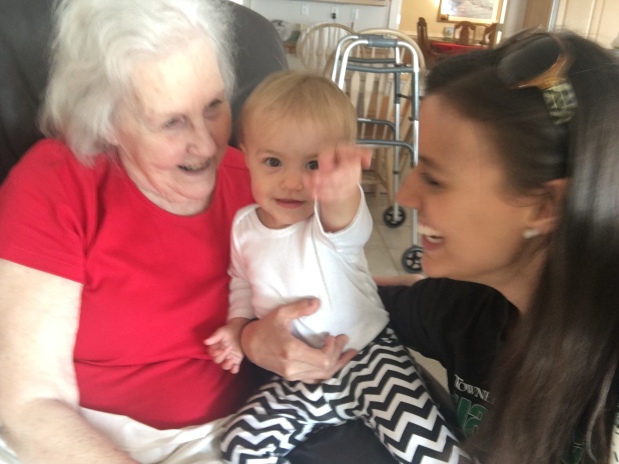 I love you Joyce Marie Dixon, my Nanny bug, mine and my daughter’s middle name sake. I’m so thankful for all the time we had together and the memories we made. I love you!

One thought on “My Nanny”